Gerrymandering is an oft-cited reason for voter dissatisfaction and the lack of competitive congressional elections. There is validity to this complaint, as the disparity between the national popular vote for congressional candidates and the resulting seat distribution has become historically large due to redistricting. Simply stated, those who are elected to Congress are increasingly less reflective of the national popular vote. Below, we delve into the numbers from the past 20 years, which expressly show the increasing impact of gerrymandering on our elections.

When the Republicans won the House in 1994, it was achieved against the backdrop of reasonably fair redistricting. In 1991, when the new district lines were established, Democrats controlled a majority of the important legislative bodies and governorships that impact the process. What resulted was a set of lines where congressional results closely resembled the national popular vote.

In 1994, when the Republicans gained 54 seats and a majority for the first time since 1952, the seat-to-vote differential was a reflection of the mood of the country. Democrats won 47.1 percent of seats, in close correlation with their 46.9 percent share of the popular vote, leading to the Republican wave.

In 1996, a late Republican surge and controversy surrounding President Clinton combined to narrow the potential Democratic gains in the House. The resulting seat-to-vote differential was -2.6 points. Democrats narrowly won the congressional popular vote but only won 47.6 percent of House seats—11 short of a majority.

In 1998, Democrats surprised some observers by gaining 5 seats. Despite the backdrop of the Monica Lewinsky scandal and the eventual conservative overreach in the drive for impeachment, the seat-to-vote differential was a scant 0.8 points.

A similar pattern emerged in 2000, in the shadow of the deadlocked presidential election. This was the last election based on the 1991 district lines, save for a few changes in Georgia and North Carolina (related to the Voting Rights Act). Democrats gained only 1 seat, winning 49.8 percent of the vote and resulting in a minor seat-to-vote disparity of -0.9 points. 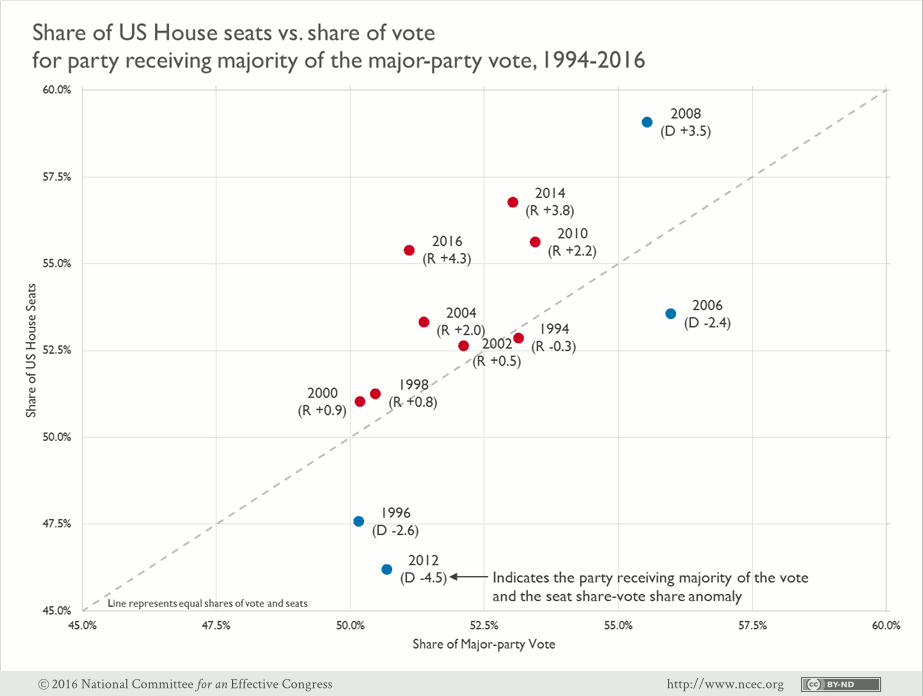 After the 2000 census, Republicans largely controlled the redistricting process around the country. Using this influence, they ushered in new district lines according to their own designs. In 2002, for the first time since 1934, an incumbent President’s party gained seats in a midterm election. Without doubt, the Sept. 11, 2001 terrorist attacks played a role in this aberrant result. Republicans gained 7 seats, but the seat-to-vote deviation was limited to 0.5 points. The result shrouded an excessively partisan national district plan that would prove costly for Republicans in 2006 and 2008.

In 2004, George W. Bush was re-elected, and Democrats lost 3 seats nationally. The House results that year can be partially attributed to mid-decade redistricting launched by Tom Delay in Texas. Without this controversial effort, the two parties might have fought to an actual draw. The seat-to-vote margin grew to 2.0 points in favor of the Republicans and showed early signs of widening.

The 2006 election was a watershed moment for Democrats, as they won the popular vote by 12 points. Ensuing control of only 53.6 percent of House seats meant a deficit of 2.4 points. This result extended the gap established in 2004, further demonstrating the impact of the Republican gerrymander.

Now the new reality—mounting disparity between the popular vote and seat distribution. In 2008, Democrats gained an additional 21 House seats, completing a 51-seat gain over two cycles. The Democratic vote margin in 2008 was 1 point, but GOP vulnerability in marginal districts exposed them to a significant loss.The seat-to-vote ratio favored Democrats by 3.5 points. Clearly, winning the presidency by 7 points buttressed Democrats in House races. However, it was highly unusual for a party to win so many seats in successive elections.

In 2010, a sizable Republican wave swung the seat-to-vote gap back in their favor. Overall, the Republicans took control of 55.6 percent of the House seats, extending beyond their 53.5 percent popular vote share. The 9-point swing in the popular vote from 2008 to 2010 was massive, eradicating the Democratic majority and delivering a new Republican advantage that was 12 seats greater than they had following the 1994 election.

The 2010 election was the last one based on the 2001 district lines. The Republicans in 2011 employed a strategy far more oriented toward incumbent protection than in 2001. When Democrats gained eight seats in the 2012 presidential election, they won 50.6 percent of the major party popular vote but only 46.2 percent of seats (a -4.5-point anomaly). Notwithstanding these losses, the Republicans still held 4 more seats than they had after the 1994 election.

We believe the Republicans’ incumbent protection strategy also helped them in 2014. Their net gain of 13 seats would have been larger if not for anemic turnout in California, combined with the growth of the Hispanic vote. With only 53 percent of the popular vote, Republicans amassed 56.8 percent of the seats (the largest majority in almost 100 years). The seat-to-vote disparity was 3.8 points, again far higher than years past.

As the 2016 election approached, we were confident that the Republicans would maintain their House majority despite a Democratic majority in the national congressional vote. While Hillary Clinton won the presidential popular vote by more than 2.5 million, the House Democrats fell short of a majority with 48.9 percent of the major-party national congressional vote. However, the disparity remains, as the Democrats will control 44.6 percent of the seats, a slightly higher seat-to-vote disparity of 4.3 points.

Prior to the most recent election, the seat-to-vote edge favored Republicans by 3.5 points over the previous 3 cycles—higher than any rolling average over the past 20 years. The results in 2016 suggest that this differential remains fairly consistent – historically high.

With the next round of redistricting just four years away, the Democrats are in desperate need to flip as many governorships and state legislative chambers as possible to ensure a more equitable outcome.

Please Note: An earlier version of this article was published on Wednesday Jun. 08, 2016 as Gerrymandering Widens Gap Between Popular Vote and Control of Congress. It has been revised to include information from the Nov. 8, 2016 general election.