For Immediate Release July 30, 2018 WASHINGTON, D.C. – In another step to bolster Democratic prospects to win back the House of Representatives, the National Committee for an Effective Congress (NCEC) has endorsed Katie Sean Casten for Congress in Illinois' 6th Congressional District, providing the campaign with it's detailed precinct ...

On January 30, 2014 the NCEC lost its National Director Russell Hemenway. Beginning with his activity in the Lexington Democratic Club, Russ spent his lifetime as a reformer. Through his work at the NCEC, Russ was an outspoken critic of the Vietnam War, earned a spot on Nixon's enemies list, and was a driving force behind campaign finance reform and the establishment of the FEC in 1971. 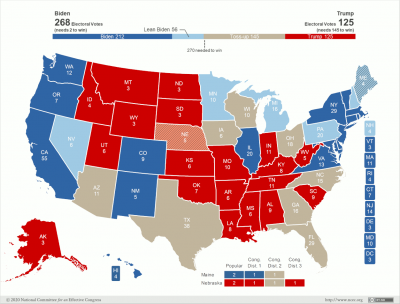 How to Make Sure Trump Loses

Last week, we detailed Joe Biden's current electoral college advantage in the upcoming presidential election (see Biden Surge and Trump Failures). In this article, we expand on the winning scenarios we briefly touched on before. A recent Axios poll (see Axios, June 30), shows that only 19 percent of Republicans are happy with the direction [...]