Recent election coverage has focused substantial attention on whether or not we will see a wave election this fall. But as much as pundits love to draw conclusions from every poll, the reality is that indicators are contradictory and historically unreliable at this point in the election cycle. We’ve seen this before—in September 2014, just two months before the last midterm election, six generic ballot polls gave Democrats a 2.1 percentage point advantage. On election night, the Republicans won the popular vote by 5.7 points and amassed a net 13-seat gain.

Democratic Party leaders currently face almost unprecedented expectations, fueled by predictions of a Democratic wave consisting of more than 40 House seats. But to use a baseball analogy, predictions this early in the cycle are about as useful as a team’s opening-week performance. While there is reason for optimism, some caution is necessary.

The likelihood remains that Democrats will regain the House this fall, though some will point to fluctuation in the generic ballot advantage as evidence of a Republican resurgence. While this makes for good speculation, it is largely irrelevant as to what will unfold in November. It’s simply too early to tell.

One data point that has remained steady, despite a recent modest increase, has been the double-digit deficit in Donald Trump’s job performance rating. That is unlikely to expand much further given the narrow scope of Trump’s base. Presidential approval ratings have often been a reliable metric of a party’s midterm performance, and that should remain so this November.

On the contrary, American attitudes about the direction of the country have brightened somewhat in recent months, which could be good news for the Republicans. The most recent CNN poll showed a 9-point surge in people who feel positively about the direction of the country, a trend that could mean trouble for Democrats. But historical precedent still suggests that Democrats enjoy an inherent advantage this November.

An over-reliance on misleading sources is also adding uncertainty. Too many projections are dependent solely on the last two presidential elections. Results from 2012 and 2016 may have signaled a trend in suburban and rural voting patterns, but we believe there are at least five rural-small town congressional districts that Democrats can flip this year, despite a double digit Trump victory there in 2016. Conversely, some of the Republican-held districts that voted for Clinton will likely remain under GOP control.

So how can we assess Democratic prospects this year?

The partisan breakdown of House seats based on past performance would leave Democrats 18 seats short of a majority. But given the wealth of open seats and the changing political leanings of several rapidly growing suburban districts, the path to a new majority becomes more clear. The opportunities are far-ranging—targets in California, New Jersey, Pennsylvania, and Texas alone make up more than half of the 23-seat deficit. Even without detailing specific districts, it is fair to say that the outcome of this election will be a narrow Democratic House majority.

Special Elections Have Been Instructive

As many have pointed out, special elections so far this cycle have been encouraging for Democrats. Not only did Conor Lamb win a district that Trump carried by 20 points, but skeptics of the national party ignore the fact that virtually every other special congressional election—from Montana to Kansas to South Carolina—revealed a favorable trend toward Democrats.

Democrats are virtually assured of winning several open seats vacated by Republicans who decided to retire rather than run on President Trump’s record. These open seat opportunities include: Pennsylvania’s 5th and 6th Districts, Florida’s 27th District, New Jersey’s 2nd District, and Arizona’s 2nd District. Right now these are all likely to elect a Democrat to replace a retiring Republican. While Democrats must defend at least three marginal open seats (Minnesota’s 1st and 8th Districts, and New Hampshire’s 1st District), the outcome of these races is unclear.

Other Republican open seats—New Jersey’s 11th District, California’s 39th and 49th, Kansas’ 2nd, Michigan’s 11th, and Washington’s 8th—are either toss-ups or likely to flip Democratic. Of these, we rate Mikki Sherrill in New Jersey 11 as the latter.  Additional open-seat opportunities have emerged in North Carolina’s 9th, New Mexico’s 2nd, and Ohio’s 12th District. One or two of these districts are likely to flip.

Among these districts, we can comfortably project a net gain of nine seats, but it is not impossible to win 10 or 11. Either way, winning these open Republican seats will make up a large portion of the 23 required to win back the House.

The additional seats needed to retake the House will come from an expansive list of battleground districts. Overall, the number of vulnerable Republicans is between 50 and 70 districts. Unfortunately, as many as half of these seats could remain in Republican hands due to the durability of Republican gerrymanders in Michigan, Ohio, Texas, and other states.

In addition, these district rankings show that Republicans now have a better than 50 percent chance to hold at least 20 additional battleground districts due to the President’s improving poll numbers and early results from the primary season. Candidate selection in the primaries could prove pivotal, as the wrong selection can remove certain districts from the battlefield.

It may be too early to identify the best targets, but here is an idea of potential gains in important states: 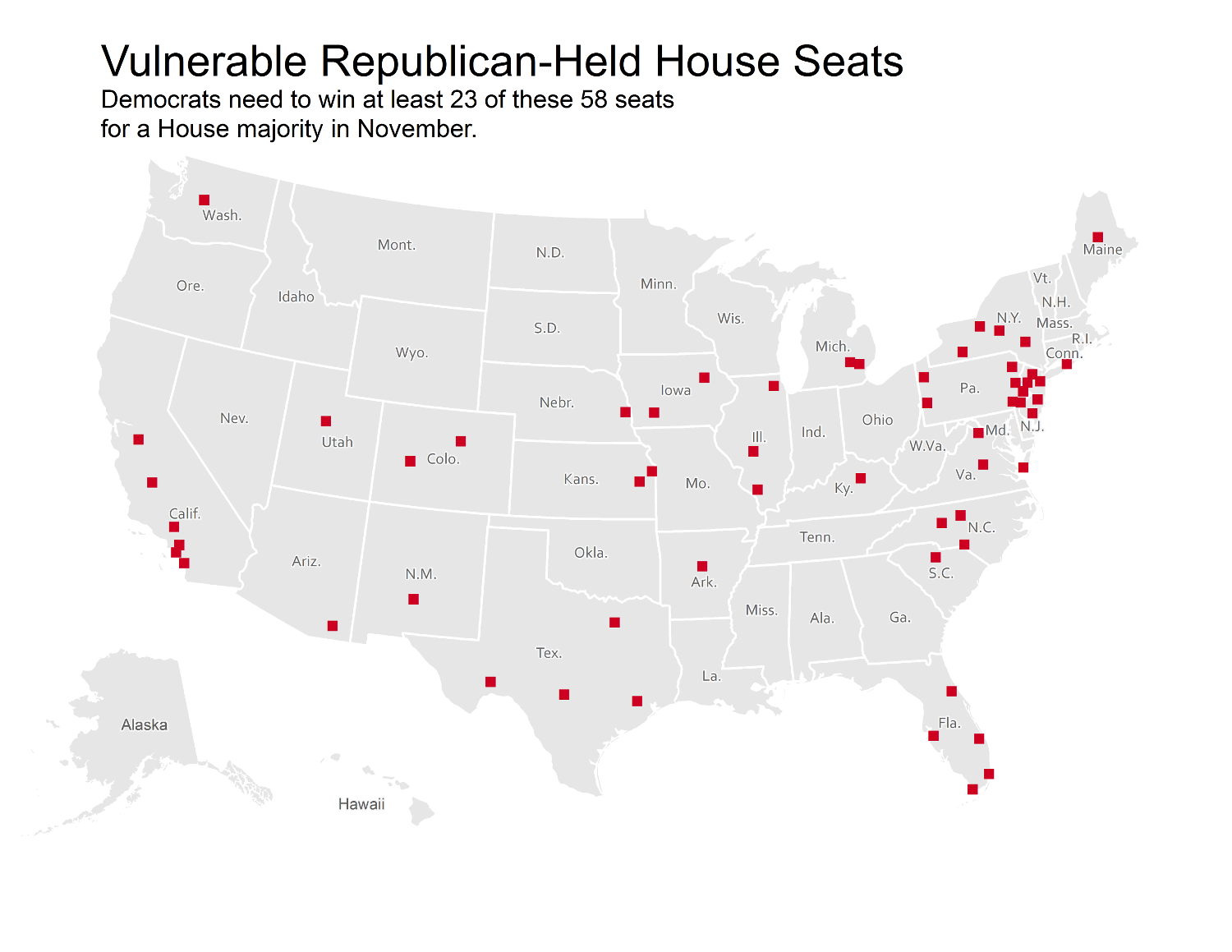 As of today, no more than 5 or 10 Democratic seats are in play. In fact, we could see every Democratic incumbent win in the fall. The last time that happened was 2006, when the Democrats gained 30 seats and a House majority. Here are the most vulnerable Democratic seats:

Path to a Narrow Majority

While some forecasters continue to throw around big numbers, the most likely scenario for a new Democratic House majority is narrower in scope. Here is one way it can happen:

Under this scenario, the Democrats would achieve a net gain of between 24 and 28 seats, giving them a new majority in the House. A scenario where the Democrats gain more than 30 seats is less likely, somewhere between 25 – 30 percent likely.