Few voters are keenly aware of the complexities of redrawing district lines every ten years. But when redistricting enters the political conversation, there is widespread agreement that a less partisan element should be introduced into the process. One solution has been to establish commissions that include representatives of both parties, as well as unaffiliated members. Many voters believe that these changes will help address the negative impacts of gerrymandering.

In 2008, California voters approved Proposition 11—the Voters First Act. The act established an independent commission to construct new district boundaries for the state legislature and State Board of Equalization. Voters there acted again in 2010 to approve the Voters First Act for Congress (Proposition 20), giving the commission further responsibility to redraw congressional district boundaries. Though not the first state to employ such a measure, California is the largest state to empower its citizens this way.

The commission consists of 14 members—5 Democrats, 5 Republicans, and 4 members not affiliated with either political party. In drawing the districts, the commission must follow a commonly imposed hierarchy of guidelines: equal population among districts; adherence to the Voting Rights Act; geographic contiguity, geographic integrity of city, county, and local neighborhood boundaries, as well as communities of interest; and geographic compactness. In addition to these guidelines, there are also prohibitions against consideration of an incumbent’s or candidate’s place of residence or partisanship in drawing the districts. 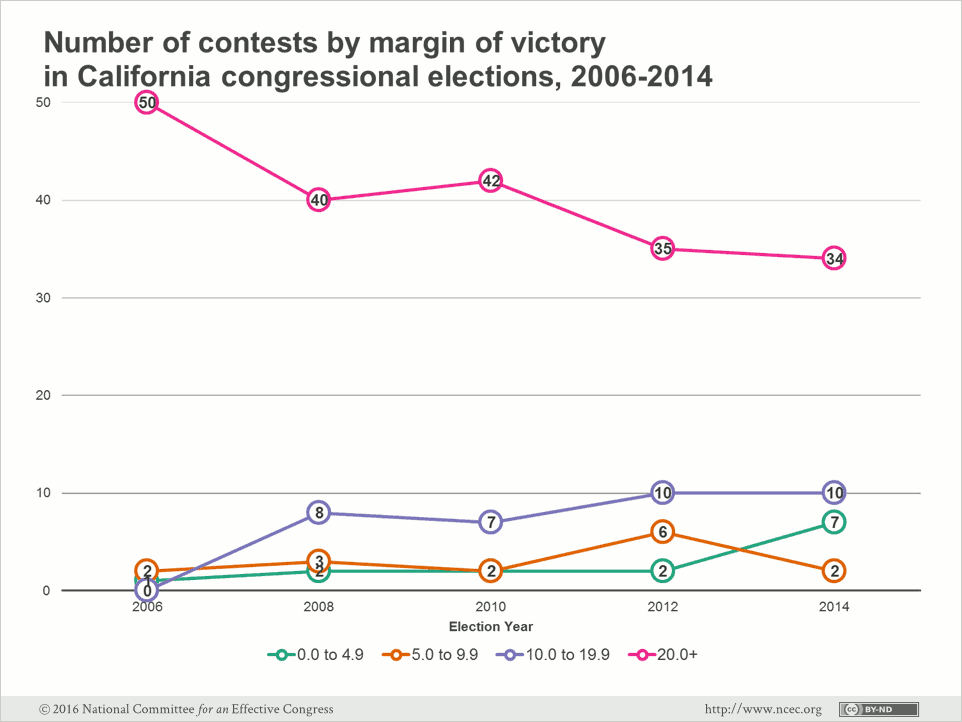 Long-term implications of the new laws are still unknown, but we have already witnessed the return of competitiveness to California’s congressional elections. In the five cycles prior to adoption of Proposition 20, only one incumbent was defeated in California’s congressional contests—Richard Pombo, a northern California Republican in the Ninth District. Even Pombo likely would have retained his seat, without the distraction of an ethics scandal. Further, only a small fraction of congressional contests were decided by a margin less than 10 points. In the 2012 election—the first after redistricting—eight contests were decided by fewer than 10 percentage points, and 10 more were decided by a margin of less than 20 points.

This increased competitiveness continued in the 2014 election. Although the 31st Congressional District was the only district where party control changed hands, several races featured close margins. Consider the following outcomes:

Several of these incumbents face difficult paths to reelection in 2016. We also anticipate competitive contests in these districts: CA-10, CA-21, and CA-49.

Moreover, the diversity of the newly-elected California congressional delegation rivals that of any other in the country. Nineteen of the 53 members are women, plus there are three African-Americans, six Asian-Americans, and thirteen Latinos.

Now compare that to Ohio, a state which has seen extensive gerrymandering in recent years. The state legislature is responsible for congressional redistricting in Ohio, with the governor having veto power over a final plan. During the two previous rounds of redistricting, in 2001 and 2011, Republicans dominated both the state legislature and statewide elected offices. Such a heavy partisan tilt ensured a gerrymandered congressional district plan: the current Ohio congressional delegation consists of 12 Republicans and 4 Democrats. 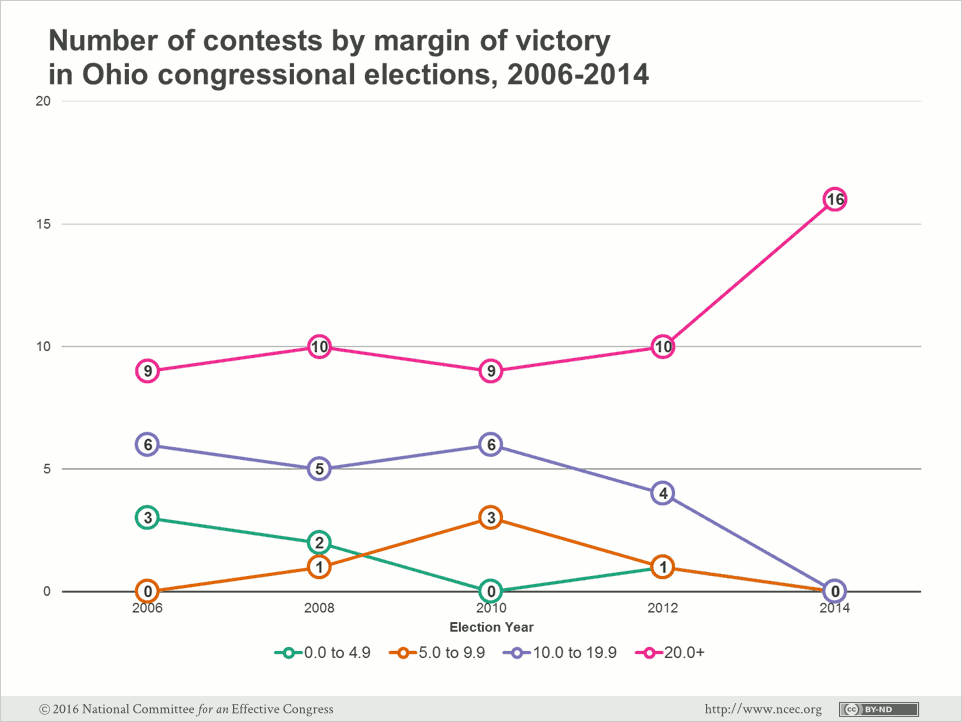 At the statewide level, Ohio is one of the most hotly contested electoral environments in the nation. In 2016, both the presidential race and the race for U.S. Senate are likely to be very close contests. President Obama narrowly won Ohio in 2012 by 166,000 votes, out of 5.58 million ballots cast. Given the competitiveness of statewide contests, there is simply no plausible scenario where the voter sentiment in Ohio is 75 percent Republican.

By 2010, polarization had begun to set in for Ohio’s congressional elections. Republicans defeated five Democratic incumbents in that election, reversing a three-seat Democratic gain in 2008. Further, only two of the state’s 18 contests were even marginally competitive that year. But the volatility of those eight contests hardly provided the mandate Ohio Republicans claimed from the results of those two cycles.

Population change between 2000 and 2010 reduced the Ohio congressional delegation from 18 to 16 districts. To compensate, the Republicans eliminated two Democratic incumbents. Although Democrats did elect Joyce Beatty, an African-American woman, in the newly-created 3rd Congressional District, that district only emerged through the Republican entrenchment of two districts that had elected members of both political parties in the decade prior to 2012. The overall map yielded more incumbent-friendly districts than existed previously, and only two of the 16 Ohio contests in 2012 were decided by 10 points or less. Moreover, even those races were won by fairly comfortable margins of 6.6 and 4.2 points.

If that disparity is any measure of one-sidedness, consider the results of the 2014 congressional races in Ohio—every member was elected with 60 percent or more of the major-party vote. Previously competitive districts in the Cincinnati, Cleveland, and Columbus areas were eviscerated. A state that is often rated the bellwether of U.S. elections has devolved into a single-party bastion: Republican. So while California turned in one healthy direction, Ohio moved dramatically the other way.

While California turned in a healthy direction, Ohio has moved dramatically the other way.