In 2017, we analyzed the core indicators of seat change in a midterm election—presidential approval, voter enthusiasm, direction of the country, and the generic congressional ballot. At the time, these indicators painted a muddled picture of American political attitudes but showed reason for Democratic optimism. Now just six weeks from the election, we are revisiting these indicators, and the picture is significantly brighter for Democrats.

It’s Still All About Trump

Donald Trump has maintained his coercive grip on American politics—every issue starts and stops with him. District by district, polling has shown that voter attitudes about the midterm election are closely aligned with their attitudes about Trump. Historically, presidential approval has always been a key indicator of who has the midterm advantage, and we believe that the importance of this measure will be highlighted this year. Since his inauguration, President Trump has struggled to achieve an approval rating above the low 40s, and recent polls have shown his approval dipping once again. Traditionally, such low figures  portend trouble for his congressional allies.

Democrats Have the Enthusiasm Edge

Throughout the primary season and a number of  special elections, we have seen evidence that Democrats are highly enthusiastic about voting this November. This is an attribute that has held throughout President Trump’s presidency. In fact, an analysis released in September showed that—in terms of major party votes—Democratic turnout in the 2018 congressional primaries dwarfed Republican turnout, by 14 points. This is the first time that Democratic primary turnout was higher than the Republicans’ since 2008. Special election results follow this trend as well, as Democrats successfully flipped a Republican House seat, a Senate seat, and 38 Republican legislative seats. Even in the districts where they fell short, the Democratic share of the vote was consistently higher than historical norms.

Recent polling echoes this enthusiasm edge. An AP/Ipsos poll released in September shows that among most demographic groups, self-identified Democrats are more interested in  participating in the 2018 midterms than Republicans. When compared to the same poll from 2014, Democratic enthusiasm has increased by 9 points, as opposed to a drop of 4 points among Republicans.

Despite the abundance of positive information, there is always a need for fresh skepticism, and the most recent party identification numbers provide it. In previous wave elections, voters increasingly identified themselves as members of the ascending party but this has not yet happened in 2018. In fact, according to a recent Gallup Poll, party identification among Democrats, Republicans, and Independents is roughly the same as when President Trump took office (with slight variation). However, over the same period Independents have consistently broke toward the Democrats, which continued until the most recent report in August.

Despite a fairly strong job market, Americans remain pessimistic about the direction of the country, which is good news for the Democrats. The Republicans were hoping that the economy and the tax cut would improve the public’s attitude, but so far that has not been the case. 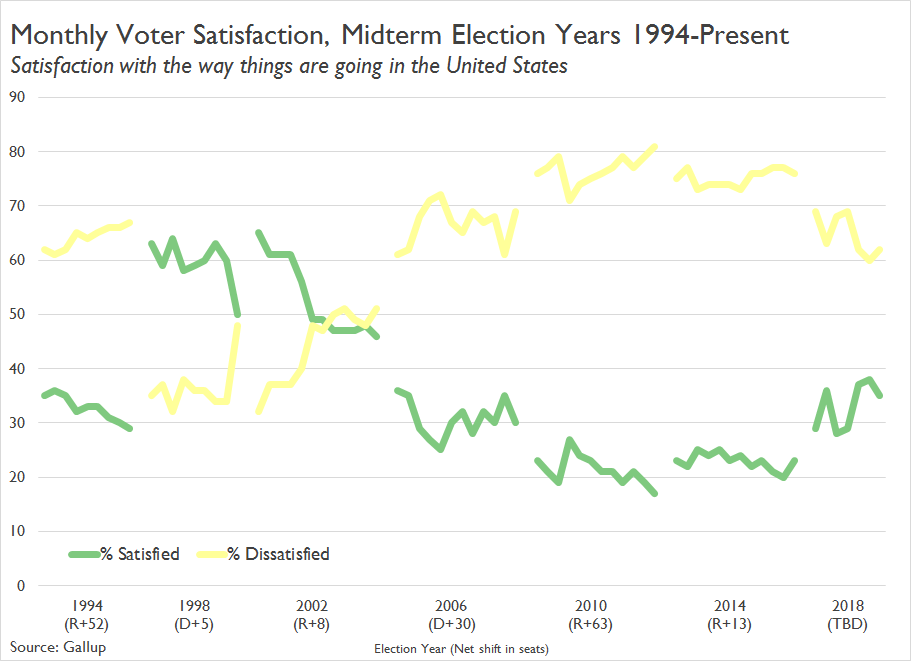 During midterm elections, the generic congressional ballot receives the most attention and the results can vary widely based on the pollster. During Democratic wave elections, the party typically enjoys a double digit lead on the generic congressional ballot. In 2006, the polling was more consistent than what we have seen in 2018, but recent polling has been positive, with several reputable polls giving Democrats a healthy advantage.

Overall, these traditional indicators suggest a positive political environment for the Democrats, but it’s by no means ironclad. In order to take back the House, the Democrats will likely need a national advantage between 6 and 7 percent to overcome Republican gerrymandering in certain competitive congressional districts. There are more than 50 marginal Republican seats and very few vulnerable Democrats, so we are cautiously optimistic.