Barely one month into the next cycle, some have determined that Republicans will retain control of the House in an election 22 months in the future. Recent articles appearing in the Washington Post and the respected Cook Report have predicted that Republicans are overwhelming favorites to retain control of the House. While winning a majority remains difficult (though not impossible), it is important to understand that Democrats are likely to make significant gains in the 2016 U.S. House election.

The Case for Republicans

The argument for Republican dominance, while overdone and premature, is a plausible scenario. Democrats hold fewer seats than at any time since 1947 and would need a 30 seat gain to win the majority. Superficially, the fact that 27 Democrats but only 14 Republicans won by less than 10 percent of the vote is offered as more evidence of the hurdles faced by Democrats. That argument is compromised by the absence of a competitive race in 2014 (a midterm election). Districts that are inherently marginal will be more competitive in a presidential election year. Some notable examples can be found within the 26 districts won by President Obama in 2012 but represented by Republican members of Congress.

One final argument advanced as evidence of the Sisyphean task facing Democrats is the impact of partisan gerrymandering that created unbalanced maps in states like Florida, Michigan, North Carolina, Ohio, and Texas.

The Case for Democrats

In recent cycles, Democrats have performed far better in presidential years than in midterm elections. Combining the results of House elections in 2008 and 2012, Democrats scored a net gain of 32 seats. Conversely, Republicans won a total of 77 net seats in 2010 and 2014. 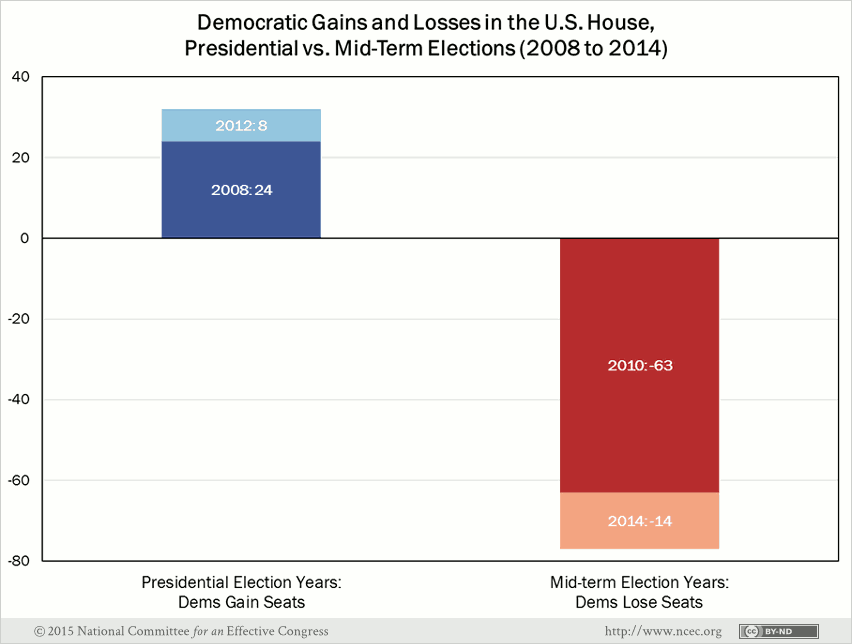 Why has this dramatic trend materialized? Part of the answer lies in the demographic divergences between presidential and midterm elections. In the 2014 election, a scant 13 percent of the electorate was comprised of voters under 30. Conversely in 2012, 19 percent of the votes were cast by this same group. Democrats won the under 30 group by 22 percent in 2012.

A more racially diverse electorate pervades presidential elections. Twenty-three percent of 2014 voters were non-white. Recent presidential year trends suggest that, for the first time in electoral history, 30 percent of the 2016 electorate will be non-white. There are several districts in the South and West, in Colorado, Florida, Nevada and Texas, where more favorable demographics are capable of altering the outcome of the 2016 House elections (more on this later). 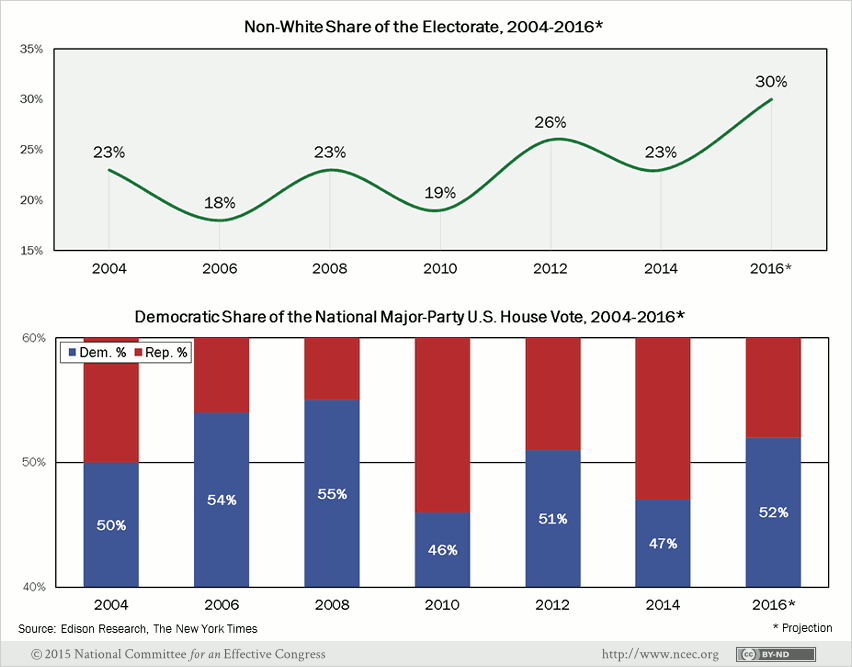 There is compelling evidence that partisan gerrymandering has complicated the Democratic mission: 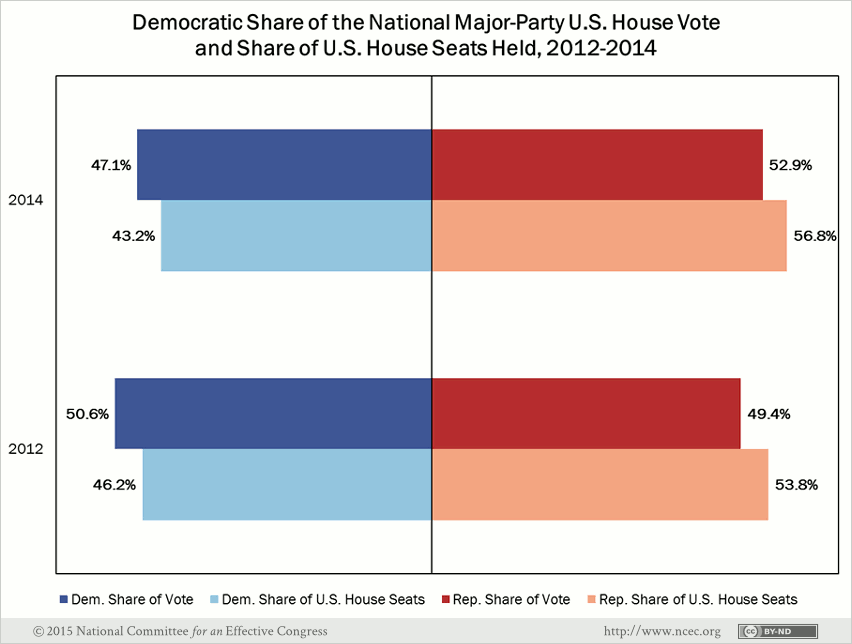 Using the 3.9-point discrepancy between votes won and seats won in 2014, we would expect Democrats to win 48.9 percent of House seats next year. Admittedly, this may be too optimistic. So erring on the side of caution, let us assume a 4 percent disparity between the votes won and seats won in the 2016 election. Given our hypothetical 52 percent major party vote, we would anticipate winning 48 percent of all House seats (or 209), a 21 seat gain—short of a majority, but a sizeable improvement. This is not the hopeless scenario where nothing short of 55 percent of the vote will get Democrats close to a majority.

Ticket-splitting has been less prevalent in recent years. Only 5.6 percent of all districts elected a member of Congress from one party while also giving a majority of votes to the presidential candidate of the opposing party. This might seem like an impediment for the minority party but a prospective Democratic candidate now holds a double digit lead against all potential Republican aspirants. It is early and these numbers may change but if a Democrat wins the presidency, by even a narrow margin, Democrats are sure to benefit in the House.

Micro Analysis of How the 2016 Election May Evolve

While the inherent weakness of Democratic prospects has been exposed, the situation has almost hit rock bottom. There are no more districts to lose in Appalachia, and every white Democrat has been defeated in the Deep South following John Barrow’s 2014 loss in Georgia’s 12th district. Having lost eight more rural seats in 2014, Democratic vulnerability in small town America has almost maxed out.

Only five districts carried by Mitt Romney are now held by Democratic members. Three of the five districts—Arizona 1, Florida 18, and Minnesota 7—are represented by popular incumbents deemed more likely to win, having survived in 2014. The other two districts—Florida 2 and Nebraska 2—were won by freshmen Democrats Gwyn Graham and Brad Ashford, respectively. They will be confronted by strong 2016 challengers. Among the other 22 Democrats elected by 10 percent or less, 16 are located in blue states likely to be low priorities by a Republican presidential nominee. Moreover, 12 of these Democrats represent districts in California and New York where turnout was horrific in 2014 (even by midterm election standards). 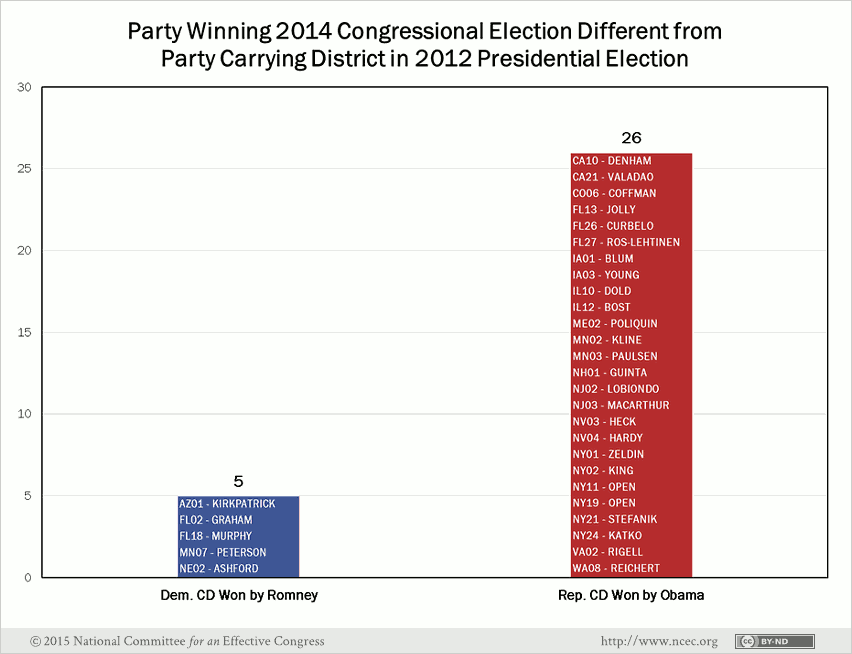 All of these data suggest that a scant few Democrats will be endangered in 2016.

The electoral landscape is not as promising for Republican incumbents and open seats. For starters, two Republican incumbents have announced their retirements: Mike Fitzpatrick in Pennsylvania 8 (in the Philadelphia media market) and Chris Gibson in New York 19 (a swing district partially influenced by New York City media). Another Democratic presidential candidate is likely to win both districts and either is a prime pick up opportunity for Democrats. Michael Grimm, in New York 11 (a Staten Island district), resigned after the 2014 midterm and the date for a special election has not yet been set—this sets up another prime pick up opportunity.

There remain 24 additional Republican-held seats in the midterm election in districts that were won by President Obama in 2012. Every one of these districts presents a challenge for the Republicans.

Some other Republican seats that are endangered in 2016 include:

In totality, it is conceivable that more than half of the districts carried by Obama will elect Democrats to Congress in 2016.

Between the two open seats and 24 more districts carried by Obama, Democrats may be more than halfway to their goal of gaining 30 seats. The other 10 – 15 present more formidable challenges.

There are several Republican-held districts, won by Mitt Romney in 2012, that are likely to be very much in play in 2016. The most prominent of these districts are Arizona 2 (the nation’s closest 2014 House race, captured by the Republican in 2014 with 112 votes to spare) and Texas 23 (a Democratic district after 2012 that was lost due to anemic midterm turnout in 2014). At least 10 other Republican-held seats appear to be in play as of now.

We are not, of course, predicting that Democrats will retake the House in 2016—only under certain conditions could Republican control be challenged. However, the most salient evidence does suggest that Democratic gains in the U.S. House are likely to exceed 20 seats with another 20 or more clearly in play.

A final word: Virginia redistricting, expected this year, may catapult one or two more Republican seats to marginal status.